Feast of Our Lady of Lourdes, 11th February 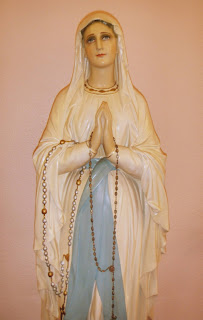 In Lourdes, France, in 1844 a baby girl named Bernadette Soubirous was born.  Bernadette’s family was very poor, and Bernadette was responsible for looking after and caring for her brothers and sisters. The only education Bernadette received was the Catholic teachings which she studied faithfully in the evenings.
At the age of thirteen, Bernadette was preparing for her First Holy Communion.  One of Bernadette’s chores was to collect wood for the fire.  One day in February 1858, Bernadette and two companions headed for the River Gave to collect pieces of wood.  Bernadette looked up towards the grotto and the caves on the riverbank.  Near the opening of the grotto, Bernadette glanced and noticed the cave was suddenly filled with golden light.  Lifting her eyes, she saw a lady of great beauty, dressed in a pure white robe with a blue sash, a veil over her head, a rosary clasped in her hands and yellow roses at her feet.  Bernadette rubbed her eyes.   What a beautiful lady!  But where did she come from?  And what was she doing here?

On March 25, the Lady finally told Bernadette that she was Mary, the mother of Jesus, and that her purpose in appearing to Bernadette was to warn her to pray and make sacrifices for sinners.  The miracles of body and soul performed at Lourdes are the proof that this message was a true warning from the Queen of Heaven to her children and that she was deeply interested in their welfare.

Eventually everyone did believe Bernadette and the grotto at Lourdes became a place of worship and the Lourdes holy water was sacred for performing miracles.
Prayer to Our Lady of Lourdes
Oh ever immaculate Virgin, Mother of Mercy, Health of the Sick,
Refuge of Sinners, Comfortess of the Afflicted,
you know my wants, my troubles, my sufferings.
Look upon me with mercy.
When you appeared in the grotto of Lourdes,
you made it a privileged sanctuary where you dispense your favours,
and where many sufferers have obtained the cure of their infirmities,
both spiritual and corporal.
I come, therefore, with unbounded confidence
to implore your maternal intercession.
My loving Mother, obtain my request.
I will try to imitate your virtues so that I may one day share
your company and bless you in eternity.
Amen

Our Lady of Lourdes & St Bernadette

Welcome to the website of Our Lady of Lourdes & St Bernadette, Kingswood, Bristol
Sunday Mass at 9am
Weekday Masses on Tuesday & Thursday at 9.30am
(Please check latest newsletter - see Newsletter tab above)
****************************************
Live daily mass from Clifton Cathedral on Saturday at 6pm, Sunday at 9.30am, 11.15am & 6pm, at 9.30 on Monday, Friday and Saturday, 7am on Tuesday, 7.30am on Wednesday and Thursday go to cliftondiocese.com
For masses streamed online at other times go to churchservices.tv
Parish Priest
Fr. Jim Williams
Parish Office Address
2 Court Road
Kingswood
Bristol
BS15 9QB

Telephone
0117 949 8743
Email
bristol.ourladyoflourdes@cliftondiocese.com
twitter
@OLOLBristol
EMERGENCY HOSPITAL ADMISSION
If you or a family member are in hospital and require an urgent visit from a Priest, please ask the Ward Manager to contact the Priest on call using the hospital 'pager' system. There is a rota in place to cover all the Bristol hospitals 24 hours a day. They will not automatically do this for you... only on request.